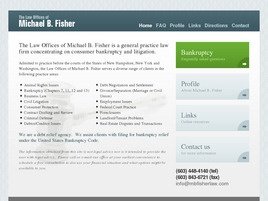 After graduating from Colgate University (Hamilton, NY) with a degree in English in 1997, Michael attended Fordham University's School of Law and earned his J.D. in 2000. He served as a summer associate following each of his first two years of law school at a mid-sized Manhattan firm and worked there as a part-time law clerk during his final year of school.

Michael began his career as an associate with the same Manhattan firm, concentrating on both commercial bankruptcy and complex litigation, including significant experience in Chapter 11 filings for numerous publicly-held companies and privately-held entities, creditor committees and related adversary proceeding litigation. Michael also represented a diverse group of entities in civil and commercial litigation matters before federal and state courts, administrative agencies, self-regulatory organizations, and at arbitration proceedings.

In 2006 Michael became associated with a Plattsburgh-based firm and quickly became responsible for managing the firm's growing consumer bankruptcy practice. As the sole attorney in the firm's Lake Placid satellite office, Michael became engaged in a more general practice, advising clients on a wide range of legal issues varying from employment and contract law to real property disputes and family law. More recently, Michael served as "of counsel" to a well-respected family-owned bankruptcy practice in Everett, WA, concentrating on consumer related filings in Chapter 7 and Chapter 13 cases.

In 2010, Michael moved to Newport, NH and opened the Law Offices of Michael B. Fisher. With a thriving new practice, Michael now serves a diverse range of clients primarily in the areas of consumer bankruptcy (both debtor and creditor), debt settlement and negotiation, and all manner of civil litigation. He often is involved in matters including foreclosures, general business law, contract and employment law, and criminal defense.

Michael strives to assist his clients by efficiently managing whatever issues arise during the course of representation. His down-to-earth personality, friendly demeanor and effective communication with clients, colleagues and the judiciary help him to achieve the most favorable results for his clients. Michael looks forward to the new challenges he faces everyday in advising those in need and to becoming an impactful member of his new community.

Michael is admitted to practice before the bars of the states of New Hampshire, New York and Washington, as well as multiple federal district and bankruptcy courts, and is a member in good standing of various bar associations. In his spare time Michael serves as head coach of the University of Vermont women's ACHA Division I ice hockey program. He lives in Lebanon, NH with his wife Abigail, daughter Charlotte and two dogs and two cats.